Things have warmed up nicely here on the Colorado Front Range, today's high is projected to be 51°F.  Positively balmy weather.

Back during Friday's riding, the needle on Scarlett's speedometer had come off the center pivot point.  I figured it had just loosened from a repair I'd done about 5 years ago during a different ride.

However, yesterday after closer examination, it wasn't the needle that was broken again but the stem on which it rides and rotates under the influence of the speedometer cable's rotation.  Dammit. 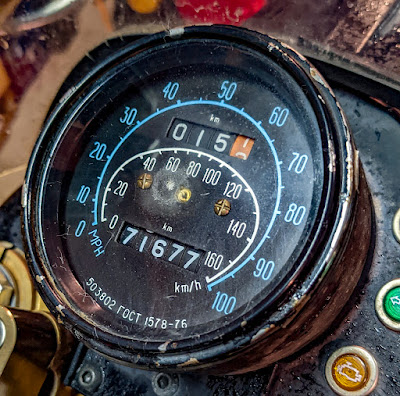 I didn't want to replace the speedometer, given the limited amount of riding I do these days; that and being a cheap bastich.  (See movie "Johnny Dangerously")

After some searching, I found the Ram X-Mount for mobile phones, and the Ram extension to couple said mount to Scarlett's handlebar. 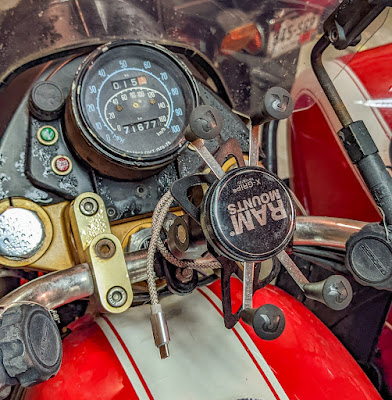 Why upside down, the mount, you wonder.  The mount rotates slight to the right when underway, so by mounting it as shown above it'll end up straight up/down to satisfy my OCD ways. 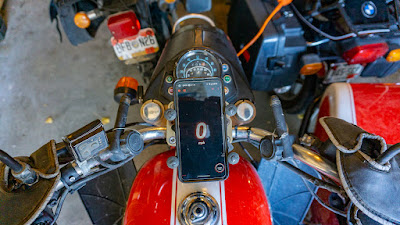 A speedometer app later, I had a speedometer again.  The OEM unit will continue functioning as an odometer and tripmeter.  A test drive showed it secure and steady, but the mount comes with an elastic square suitable for further securing the phone if needed.
Today, Sunday, the weather having warmed up as it did, it was time for further test riding with the phone mount in place.  I drove over to the RV storage yard and after clearing the small amount of snow off the roof; set up the 100W solar panel to keep the house battery charged up while in storage.  The small 1.5W panel I'd been using before proved worthless.
That chore complete, I went over to Cabelas to pick up an online order and do some further testing of the phone mount by using Google Maps to get to the store.  No issues, very visible and Google Maps shows one's speed alongside the posted speed limit, so it's very handy.
Pickup done, I wandered back to the Rocking Horse neighborhood for views of Mount Evans as it was a much clearer day today than Friday.

These peaks are not part of Mt Evans

I actually had to remove a layer since it got some warm!  The grip covers let me riding initially with summer gloves; then without gloves for the return trip home.
I'm quite satisfied with the performance of the X-Mount from Ram so far, we'll see how it does in the long run.
Posted by redlegsrides at 2:47 PM

The X mount by Ram Mount works well for me and I hope it is good for you. Beautiful photos yet again. That is the first speedo I have seen that the needle came off.

Thanks for the feedback and comments Oz...
As to the Russian speedometer, it probably didn't help that I had taped the needle back on when it had broken before years ago. I am sure the extra weight of the tape over the last few years weakened the stem connecting it to the speedometer mechanism.

What year is that speedometer? Don't remember my Ural reading that way, it was a 2011.

Nice to see snow photos once again, Denver can keep that freezing weather though.

My speedometer also broke but it was due to the cold. When it was colder than -20°F or so, the speedometer read really high. One cold morning, the needle went way past max and the needle broke off. The replacement was relatively cheap and it worked much better...