This is now just an archive of info I found helpful when dealing with Samurai issues.

I am no longer an owner of one.

Spent too much time finding (again) the instructions to adjust the Cold Idle Setting on the Sammy this morning.  Decided to create a new page on the blog to make it easier to find for the next time.

From Surly (RIP): This adjustment will correct a high-idle condition at engine startup. (Hot idle speed adjustment is performed afterward.) You do not need to remove the carb (or any part of the carb) to make this adjustment.   LINK to original thread: Idle Speed adjustment and source of the images below.

Pic 1 shows the back side of a typical Samurai carb. The yellow circle shows a mark on the cam lobe which should be aligned with the center of the post beneath it. The red circle shows the two holes which must be "pinned" together with a nail or an allen wrench to make the adjustment. 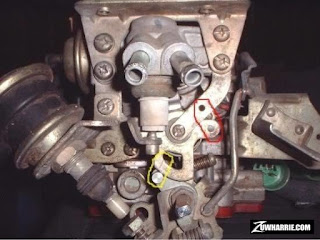 Pic 2 shows where to position a large flat-blade screwdriver. Simply lift the lower lobe until the two holes align... 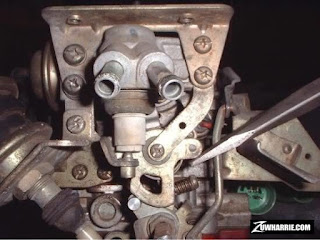 ...and insert a pin to hold it there. 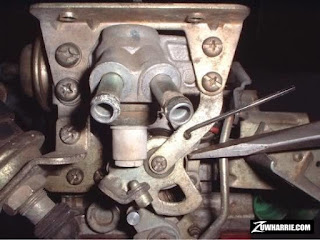 Now move your screwdriver to this position... 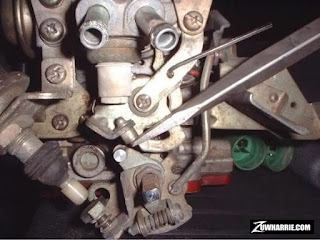 ...and bend the tab slightly upward. Move it a little bit at a time, repeating the procedure as necessary until the mark aligns with the post beneath it when the pin is removed. 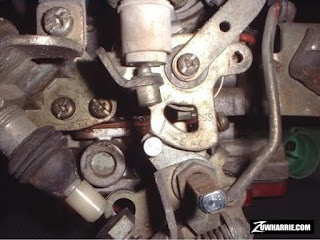 Now remove all your tools and start your engine. Surprise!  :)

In the below picture, Mike is using a spare carburetor of his to point to the screw in question. 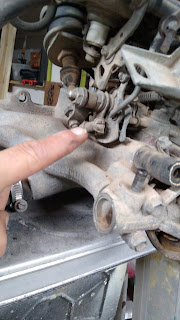 The above screw actually affects the opening of the Secondaries, aka secondary Venturi's or butterfly valves within the carburetor.  These are the ones used when underway, under load and at speeds higher than just idle or low speeds.  They enable bigger air volume for the carburetor as more fuel is required for higher loads/speeds. 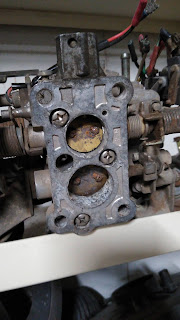 View of bottom of Carburetor's top half
The two round disks are the butterfly valves
image courtesy again of Mike W.

Then, just for reference, here's a pic of the correct idle adjustment screw, again courtesy of Mike W. 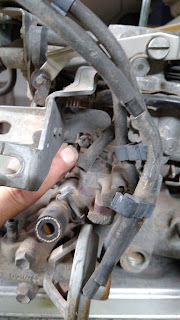